If you visit Nafplio in the Peloponnese you cannot ignore the Palamidi Fortress.  It is a vast ruin atop a rocky outcrop towering over the town. 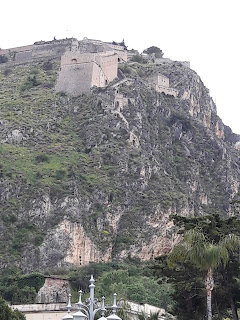 It was built by the Venetians in the early 1700s but was captured by the Ottomans only a year after its completion.

From the 1800s it was used as a prison and the steps from the town at the bottom up to the top were built at that time - apparently 857 in total and pretty steep at that.

For our last day in Nafplio we decided to visit the fortress as it sounded like a very interesting site historically.  However, I was not up for the climb via the steps so we strolled down to the harbourside to catch the little hop-on-hop-off tourist bus which takes 5 minutes to get there via a road at the back of the hill.

We arrived just after 10 a.m. and it was very quiet - none of the tourist coaches had yet arrived so we were able to have the place almost to ourselves for an hour, before the hordes arrived.  As with the Acronafplia Castle, there were several information boards scattered around to give an insight into the fortress's history. 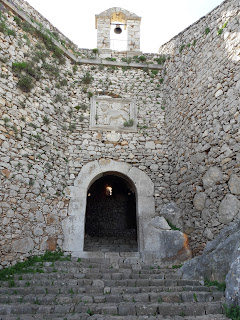 Again, above the arch is the Venetian winged lion symbol of St Mark 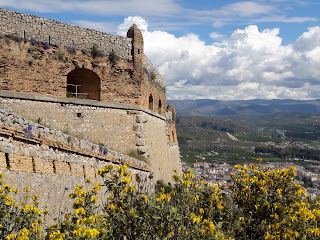 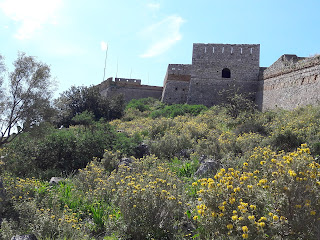 It is not a place to visit if you are unsteady on your feet, in fact in some places it is downright hazardous.  I think it was the first time in ages that P and I had to hold hands! 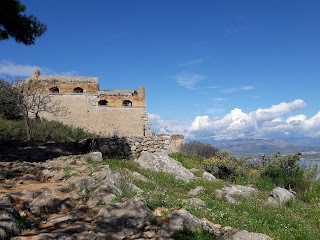 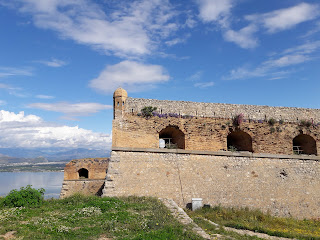 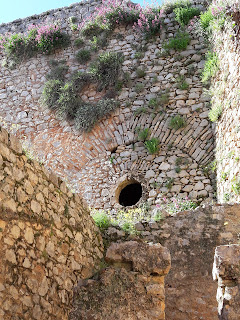 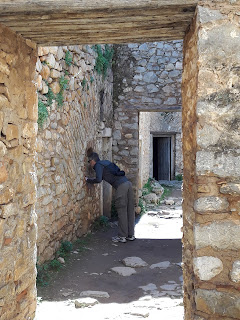 Needless to say, the views from the top are pretty outstanding and well worth the visit. 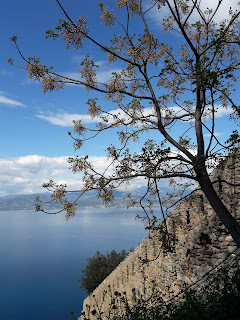 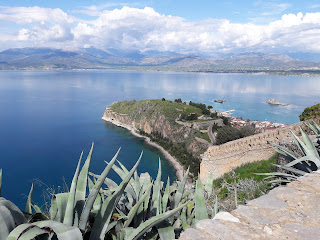 Back on terra firma, we spent the rest of the day strolling around the New Town which was interesting - fewer tourists and a proper working neighbourhood rather than the more touristy Old Town where we were staying.

We were going to be heading to Athens for our last full day in Greece so popped into the little bus station ticket office to buy our tickets for the 11 a.m. bus the next day. P was surprised to discover a fellow Aussie refugee in the ticket office - the lady behind the counter was a Greek Australian who had been born and brought up over there but moved back to Greece a while ago.  They enjoyed a little chat about Aussie *stuff* which made his day.

Another couple of cafe stops and our last day in Nafplio was coming to an end.
Just time for another stroll around the streets soaking up the sunshine. 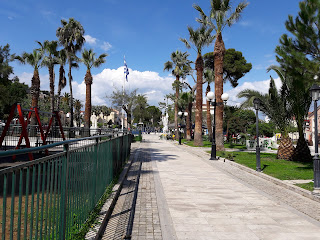 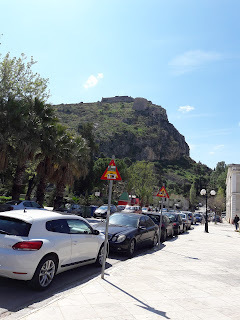 at April 25, 2019
Email ThisBlogThis!Share to TwitterShare to FacebookShare to Pinterest