After our first day's showers, the second morning broke grey and dull with the threat of more rain to come.

As our little pension was tucked up beneath the Acronafplia castle, we decided to take a walk up there as we had read that it was worth a visit.  This stone archway marks the start of the path that winds up through the castle grounds.  It bears the winged lion symbol of St Mark above the lintel, from the time of the Venetians in Nafplio. 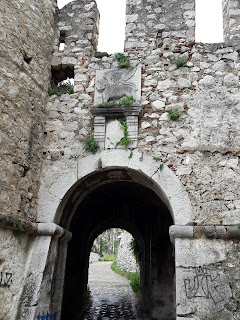 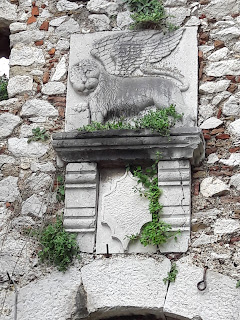 The castle is the oldest part of the town, and at one time actually housed the entire town within its walls, until it was turned into a fortress by the Venetians in the 13th century.

It is possible to drive up through the site so there is a paved roadway all the way up, which made it very easy for walking.  The first sight you see, however, is the derelict 1960s hotel which took pride of place high up on the hillside, commanding a great view over both sides of the promontory.  We were told that it was originally owned by the government and was a training hotel for apprentices in the hospitality and catering professions.  Alas, it is now just an eyesore. 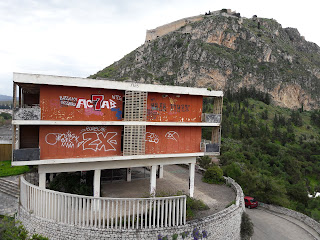 The castle site is a beautiful place to stroll around. It was very quiet the day we went there with hardly anyone else around.  There were masses of wildflowers everywhere and even in the dull grey light they seemed to shine. 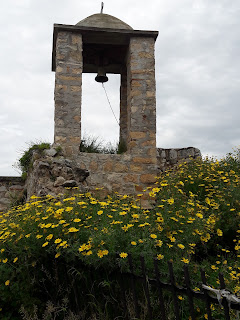 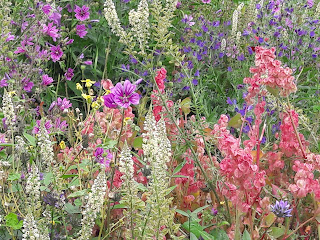 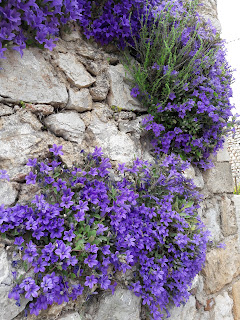 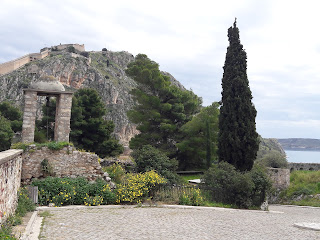 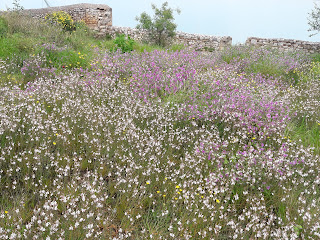 There were quite a few information boards around the site, explaining the chequered history of the area when it was repeatedly fought over by Greek, Venetian and Ottoman armies.  We spent quite a while up there and it was a wonderful way to spend a dull, damp morning. 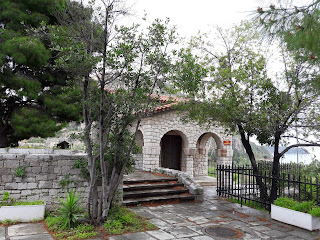 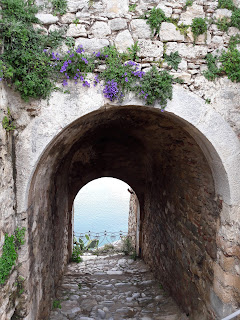 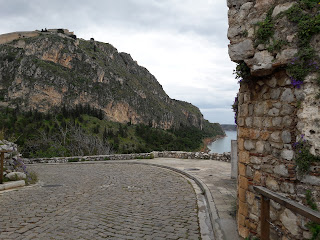 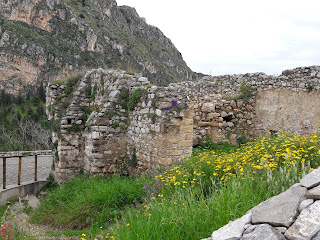 From the entrance to the castle you can look across to the imposing Palamidi Fortress which stands proud atop the huge rocky hill overlooking the promontory.  There are apparently 900 steps from the town up to the fortress and we could see those from where we stood. 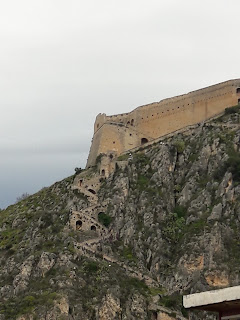 It looked like pretty steep going to me so we decided we would take the little tourist bus which drives up the roadway at the back!  But that would be another day as a prolonged, heavy downpour sent us scurrying back to our room where we just whiled away the afternoon drinking coffee, doing the crossword photocopied from The Times before we left home and gazing out at the town from our window.

We only ventured out again early that evening to the closest taverna in order to eat and were surprised by the  number of people (fellow tourists) who had also braved the downpour to get there. It was full by 7 p.m.  We were forced(!) to drink an extra carafe of local wine whilst waiting for the rain to ease off sufficiently to brave the steep steps back up to the pension.

The weather forecast for the following day was much more promising so we looked forward to seeing a little more of the area.


at April 23, 2019
Email ThisBlogThis!Share to TwitterShare to FacebookShare to Pinterest