Some time ago a good friend had been on a pheasant shoot and brought us a bird for the freezer.

The legs were left over so I popped them into the freezer for later.

As we had to defrost our freezer this week I thought I had better use up the legs as they had been there a while.

I put them into a casserole dish, wrapped in bacon, with a little homemade gravy and gently reheated them in the oven. I served them with herb crusted roasted new potatoes and steamed carrot and courgette chunks.

Not too bad, but the legs were a little sinewy and I am not sure I will try them again. 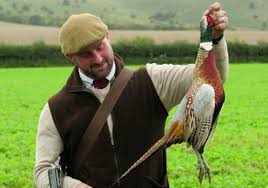 This is a Google photo - NOT our friend!

at July 03, 2019
Email ThisBlogThis!Share to TwitterShare to FacebookShare to Pinterest