The 2019 NatWest International Island Games are currently underway over in Gibraltar.  The first Island Games were in 1985, bringing athletes together from different islands to compete and create links internationally. The Isle of Man has a team taking part, as usual, and there is daily coverage of events in our local media.

The Games are hosted by a different island each time. I think everyone wanted to go to the Bermuda games!

An interesting summary of the background to the games can be found on their website, an extract is reproduced here...

In the beginning of the 1980s the idea of organizing ”The Year of Sports” was born on the Isle of Man, with the highlight of the year being the Island Games.  Islands with similar history, heritage and geography were invited and in the summer of 1985 the first ever games were held. 700 participants from 15 islands participated in something that became an amazing success. The games were originally meant to be held once, but it was decided that the experience had been so good that they all wanted to do it again, this time in Guernsey in 1987, and the rest is, as they say, history.
The NatWest International Island Games has gone from 700 participants, 15 islands and seven sports to 2500 participants, 24 islands and 14 sports. Now it is Gibraltar’s turn to host, for the second time. But since 1987 in Guernsey the hosts has been as follows; Faroe Islands, Aland Islands, Isle of Wight, Gibraltar, Jersey, Gotland, Isle of Man, Guernsey, Shetland, Rhodes, Aland Islands, Isle of Wight, Bermuda, Jersey and Gotland.   Every other year the games are held and the host island gets to choose from 18 different sports. You can put on between 12 and 14 different sports. To get to compete in the games you must either be born to a member island or have lived on one at least 12 months prior to the Games.

It looked to be quite warm over there for the 10K race. 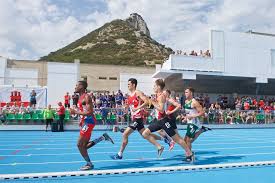 at July 09, 2019
Email ThisBlogThis!Share to TwitterShare to FacebookShare to Pinterest