Welcome Home... To Rain and Floods

We arrived back home yesterday evening after a very enjoyable stay with friends who live near Evesham.

Our flight back from Birmingham landed around 5 p.m. and on the way home it was raining quite steadily.  When we awoke this morning we heard on the local news that there had been quite severe flooding over on the east coast of the island overnight and a few roads were closed or blocked.

P decided to drive into Douglas anyway as the fridge was empty and we needed to stock up.  Luckily the main east/west route had been cleared so he managed to negotiate the standing water and mini-lakes without too much trouble.

Residents of the eastern village of Laxey, however, have fared pretty badly with several people trapped in their homes and the road swept away in the flood.  A rescue helicopter was called in to help evacuate some of those trapped as the emergency vehicles were having difficulty getting in.

We have escaped the flooding over here on the west coast and I feel very sorry for those who have suffered.  The community spirit has proved once again to be strong here in the island and local hotels and residents have offered free accommodation to those affected.

More rain is forecast later this week, courtesy of Hurricane Lorenzo.  Fingers crossed that we escape the worst. 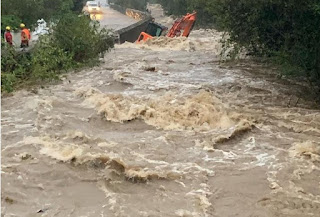 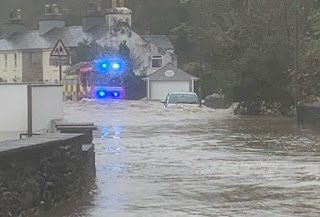 (pictures from Manx Radio)
at October 01, 2019
Email ThisBlogThis!Share to TwitterShare to FacebookShare to Pinterest