Not one of ours though.

One of our group of friends invited us to join him today at the last minute to celebrate an "in-between" birthday today.  We all met up (8 of us) at The Boatyard restaurant on the marina for their Silver Surfers' Lunch special, described as small portions for the smaller appetite.

For those who are not interested in reading about food, look away now.

We had their "Cup of Soup" to start.  A very tasty home made carrot and coriander soup served in a large breakfast bowl type cup with a couple of slices of bread on a small wooden platter.

Main course was either their home made "Fish Fingers" with chips and mushy peas or a chicken and ham pie with mashed potato, roast parsnip and parsley liquor.  I opted for the fish fingers, which were actually two decent sized pieces of cod in a light and fluffy beer batter.

We could also have had a dessert if we wanted to but nobody had any room left for anything but the mug of filter coffee which was included in the price.

We had a great view across the marina towards the castle.  The sun was shining, the sky was blue and the sea was sparkling.

A rather nice way to spend a Tuesday lunchtime. 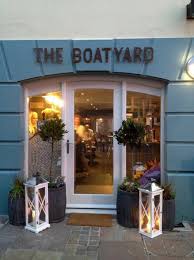 at March 03, 2020
Email ThisBlogThis!Share to TwitterShare to FacebookShare to Pinterest