To use an old expression.
I swear the girls are trying to finish me off.  We were due to meet this morning at the usual place in the car park. I arrived early because I needed time to change into my sturdy walking shoes (I can't drive in them).
This was the scene when I arrived. 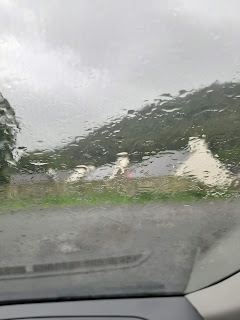 Luckily it had stopped by the time the others arrived so we set off on the route they had decided on. This week there were an awful lot of uphill bits.  We started up the Gleneedles Road which climbs steeply up Slieu Whallian Hill. After a short level section at the top we turned off onto the steep lane down to meet the Foxdale Road. Across this road and along the footpath which runs alongside the stream, so far below us we couldn't see it, although it was rushing along quite noisily.  Then came yet another uphill section to meet the Archallagan Road, leading back to St Johns.  Two hours in all.
We then took a little detour as one of the girls wanted to pop into the civic amenity site's reuse centre where there was something she wanted to pick up. A barely used baby buggy in excellent condition for a friend's grandchild.  She pushed this the rest of the way, along the railway trail back to the car park!
We were not aware before we set off that there was a big cycling event on today.  The Manx 100 mile endurance ultra mountain bike challenge.  The car park was being used for one of the stages and was packed by the time we got there, as was the cafe where we usually stop for coffee and cake at the end of our walk.  We were lucky to get a table and enjoyed coffee with a slice of coconut & chocolate cake to share.
There were some very pretty wildflowers on the table which I could not resist photographing. (Those legs behind belong to the stools at the bench. Quite quirky) 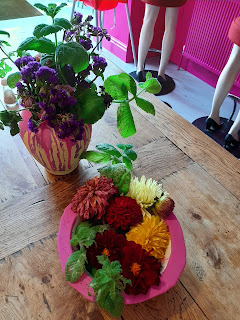 Back home, showered and ready for a snooze.
at July 26, 2020
Email ThisBlogThis!Share to TwitterShare to FacebookShare to Pinterest