The iconic wooden framed scoreboard used at the Grandstand for the TT races is the oldest manually operated one of its kind in the world. 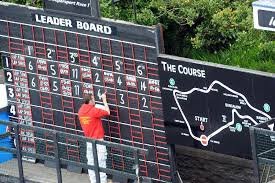 Each year, for the century old TT races in June and the Manx Grand Prix races in August, the scoreboard has been operated by the Isle of Man Scouts - 70 of them are required to keep score.

This year, the powers that be decided that this wonderful old structure was outdated and so have taken the decision to replace it with a modern digital version. The original scoreboard is being handed over to Manx National Heritage for preservation.

Unfortunately, the course map, which formed part of the structure (you can see it in the top picture) has now been stolen.

at October 13, 2020
Email ThisBlogThis!Share to TwitterShare to FacebookShare to Pinterest