This morning we had just finished a late breakfast and were still in our dressing gowns at 9 a.m. when the doorbell rang.  There were two gentlemen who had arrived to carry out a survey on our house on behalf of our purchasers' bank.  It seems the bank had made a bit of a mistake as they have already sent another surveyor who carried out a full survey  last week and has submitted his report. P explained this to our two early visitors but they became quite stroppy and eventually left in a state of high dudgeon.   Not the best start to the morning.

We had a couple of errands to run today, the main one being to collect some books from the library as they will be closing this afternoon until early January. As it was a fine, dry day we drove down and parked on the promenade and walked alongside the beach to the House of Mannanan museum, dropping off a couple of bags of donations to the charity shop on the way.

The museum coffee shop are offering special Christmas baps this week.  Large wholemeal soft baps filled with "proper" thick cut ham, turkey, stuffing and cranberry jelly for only £4.  Very tasty they were too.

After that huge lunch we walked around the quay to the castle and then back around the marina to the library. 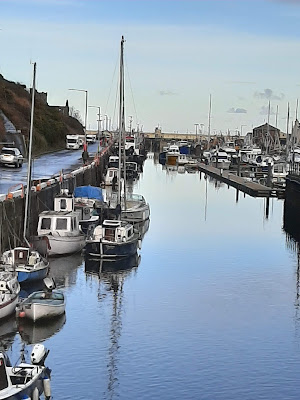 The news here at lunchtime is that new restrictions are being introduced from midnight to further limit non-resident travel to the island, in light of the recent discovery of the mutant strain of the virus in the UK and beyond.

It just goes on and on.

at December 22, 2020
Email ThisBlogThis!Share to TwitterShare to FacebookShare to Pinterest