Never a dull moment here at JayCee Towers (she says with tongue firmly in cheek).

On Friday I called the GP surgery and was asked to pop in so that they could take a look at my arm as the red patch had spread quite considerably.  It appears that it is most likely just a delayed immune response to the vaccination - two weeks instead of the more usual couple of days.  So that's alright then.

Saturday was our wedding anniversary. We didn't do anything exciting, as we are still in our Lockdown number three, however our local hostelry offers free home delivery on meals from their usual menu so we had two enormous meals delivered to our door by a charming lady.  There was so much food that I felt as though I was going to explode afterwards. I should have kept some for leftovers but I was too greedy.

Sunday morning was glorious. Blue sky and sunshine, although a sharp frost.  I met the "girls" for a reasonably social-distanced walk, all masked up of course.  We walked for an hour and a half along the heritage railway track into Peel and got takeaway coffees to drink on the Promenade in the sun. 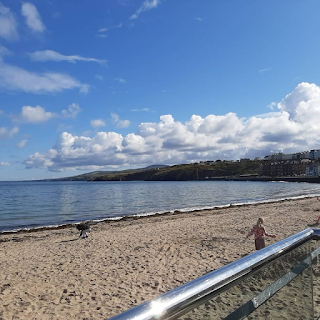 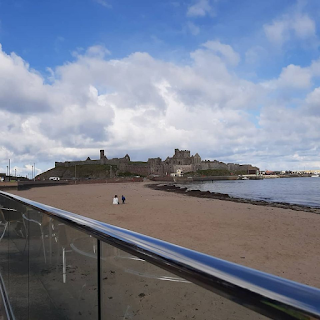 I was feeling a little tired by now so, instead of the hour and a half walk back, I sent a text message to P and asked him to drive out and collect me.  It should only take him five minutes so I strolled down to the far end of the Prom to wait there.  Suddenly, the sky darkened and it began to hail quite steadily.  P still hadn't arrived and I was getting pelted by hailstones so I put up my hood and began to walk up the hill to the coast road. When he eventually pulled up beside me he said that he had stopped by his friend's house on the way to drop off a magazine and they got chatting.  He only decided to carry on his way to pick me up when it started to hail!

The rest of Sunday was spent cleaning and tidying as our agent had booked a socially distanced house viewing for this morning (Monday).

The viewing was a complicated arrangement involving lots of masks, gloves, sanitiser and everyone having to be in separate rooms. P and I were not allowed to be in the house at the same time as the viewing so we went to do our weekly shop until they had finished.  It seems to have been successful, just need a survey report (again) so keeping fingers crossed for a sale this time.

My arm is feeling a little better today. The large, vivid red patch is now a just a delicate shade of pink and the soreness is receding.  I hope it doesn't do the same after the second vaccination!  At least I shall be prepared for it next time.

Off now to sit in the afternoon sunshine before tonight's wintry showers arrive.

at April 12, 2021
Email ThisBlogThis!Share to TwitterShare to FacebookShare to Pinterest