This evening, feeling a little sad and dispirited after the loss of our dream home, we decided to visit the little tasting bar of the local Fynoderee gin distillery.  It is less than a five minute walk from here and, although the distillery has been going for a while now,  the bar has only recently opened up.  One of its gins features in a national Gin Club offering in the UK, so it must be good!

We ordered a large elderflower gin and a Fever Tree Mediterranean tonic each and sat back to enjoy the ambience.  My goodness though, the gin seemed quite strong and we were soon quite mellow. 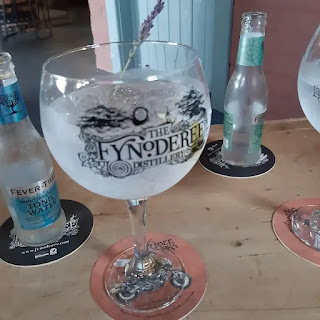 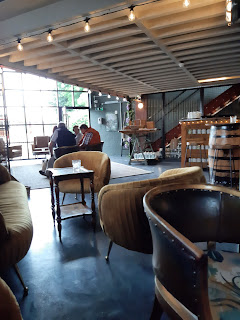 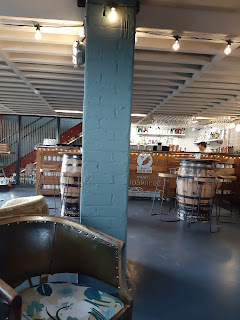 For those of you who may be interested in the origin of the name Fynoderee, here is the sad story from the distillery's website...

Are you ‘sipping’ comfortably? Then I’ll begin...

Many years ago... Kitty Kerruish was a young and beautiful girl who lived with her father in a small cottage surrounded by fuchsia bushes up at the top of Glen Auldyn in the North of the Isle of Man. Her father was a tailor and the men of Ramsey would visit the cottage to have their suits made for them. Even though Kitty’s father was not considered the best tailor in the world, he still did good trade as the men would happily trudge up the many miles along the gorse lined footpaths from Ramsey in the hope of getting a glance of the beautiful Kitty Kerruish - and to even make a play for her hand in marriage. Kitty, however, was so devoted to the needs of her father, who was frail and in need of her help, that she turned away her many suitors with the excuse of being unavailable for marriage while her father was still alive.

One summer evening, as Kitty was sitting outside her cottage working on her spinning wheel, and awaiting her father’s return from a business trip to Ballaugh, she heard a strange rustling in the undergrowth... Then appeared the most beguiling young man she had ever set her eyes upon. Though small in stature, he possessed such a mesmerizing beauty that Kitty quickly realized he could not be of mortal form, but rather a member of the fabled fairy folk community that were known to inhabit the Isle of Man at that time.

It soon turned out that this little fellow was no ordinary fairy, as he introduced himself as “Udereek”, Prince of the Elfin kind! He then proclaimed his undying love for Kitty, who he had secretly been watching and lusting after for many months. Kitty, although taken-aback by this sudden proclamation of love, was entranced by his magical beauty and was powerless to resist his beauteous charms. When Udereek went to kiss her, she fell into his arms, and at the same time fell instantly and hopelessly in love with him too.

Now, it is completely forbidden by the Fairy Court for fairy kind to fall in love with a mortal girl, and for Prince Udereek - who held a very high position within the Fairy Court - it was even more important that their love could never be discovered. So, before Kitty’s father could return to the cottage, Udereek quickly vanished, but not before making plans to meet Kitty at dusk the next evening under the Blue Rowan Tree nearby. And so it was that Kitty and Udereek would meet at dusk every evening for their secret trysts under the Blue Rowan Tree, and day-by-day each fell more and more in love with the other.

Weeks went by, until one evening Udereek explained to Kitty that the next night was to be the “Royal Festival of the Harvest Moon” in Glen Rushen and that it was decreed that all Elfin kind were to attend the festivities until the moon had set over South Barrule. Kitty teased Udereek, suggesting he would have such a good time at the ball that he would forget all about her and instead be seduced by a beautiful fairy maiden. Affronted, Udereek insisted this could never happen... To prove how much Kitty meant to him, he would make his escape from the Harvest Festival early (after only three hours had passed), and he would come looking for Kitty as usual under their Blue Rowan Tree.

The next night, fairies from all parts of the Isle of Man assembled before the Great King and Queen. Elfin kind, sprites and bugganes came together for a bounteous feast, dancing and much frivolity. Udereek found himself sitting next to a fairy named Estella, who was widely considered to be the most beautiful of all fairy maidens - and who possessed ways of seduction and bewitchery that no mortal man could ever resist. Estella was delighted to be seated next to Udereek and was attracted to him for his good looks and his high position within the Fairy Court. Estella pulled out all the stops to seduce Udereek, but he was immune to her charms, bewitched as he was by his love for Kitty, and to whom he remained true. Then, as the feasting ended and the dancing began, Udereek took his chance to slip away into the night and to find Kitty as he had promised to do.

Estella was mortified and furious that Udereek had so easily resisted her charms. She was confident in her superior beauty and couldn’t understand why her attempts at seduction had been so easily brushed aside. This had never happened to her before and she soon became convinced that Udereek's heart must already be taken. Overwhelmed with jealousy and rage, Estella stalked Udereek as he quietly made his departure from the Harvest Festival Ball... Unbeknown to him, she then followed him on his flight of passion back to Glen Auldyn and the waiting Kitty Kerruish.

Relieved by the eventual return of her lover, Kitty fell into Udereek’s loving embrace - just as Estella stumbled upon the scene... Consumed by jealousy and bitter hatred for what she saw, Estella vowed to have her revenge on the helpless lovers. Quick as lightening, she returned to the Harvest revels where she announced to the full Fairy Court what she had just witnessed. Astonished and betrayed by the treachery of Udereek in falling in love with a mortal girl, The King and Queen called an immediate halt to the festivities. They flew straight to the scene of the crime - where Udereek was caught in Kitty’s embrace, pulled away and instantly sent for trial.

Estella beseeched the Great King to exact a terrible revenge on Kitty, but the monarch was a fair man (and not immune himself to the obvious charms of Kitty), and he could not bring himself to harm her. Instead, he gave Kitty instructions to flee the Isle of Man and decreed that she must be gone from the shores of “Ellan Vannin” before the next full moon, otherwise her fate was in the hands of Estella - and he would do nothing to prevent Estella from having her own sweet revenge.

But Kitty could not bring herself to leave her father, or her memories of her passionate love for Udereek. Every evening she would return to their special place under the Blue Rowan Tree in Glen Auldyn. She would pine for her lost love and dream of his unlikely return, and she did not notice the passing of the days. Then one evening, as Kitty sat in the twilight, the moon rose to its fullest... Estella, still consumed by her bitter jealousy, gleefully summoned a rising mist from all the poisonous plants in the glen, and silently directed it to surround poor Kitty. Slowly and imperceptibly, Kitty breathed in the toxic mist until her fate was sealed.  That night, overcome by the noxious fumes, she passed away in her bewildered father’s arms.

For Udereek, a different and even worse fate was in store. He was formally tried by his peers and condemned to banishment from the fairy community - to remain a lonely wanderer in Ellan Vannin until the crack of doom. His sentence was no sooner pronounced by the King than Uddereek was instantly changed from his beautiful Elfin form into a figure resembling a satyr: half man, half billy-goat - from whence he derives his present name of Fynoderee, or HAIRY ONE.

He has remained on the Isle of Man ever since.

Although heartbroken and fallen from grace, the Fynoderee is known for good-naturedly assisting those who he befriends, and many are the tales of the hairy fellow’s beneficence. Over the years and by moonlight, he has helped farmers to reap and sow, moved boulders to assist builders and mended many fishermen’s nets on the quaysides around our Island.

at July 27, 2021
Email ThisBlogThis!Share to TwitterShare to FacebookShare to Pinterest