In my previous post I mentioned the grave of little Samuel Cathcart who died aged 16 months, with the headstone inscription "Our Wee Duckie". 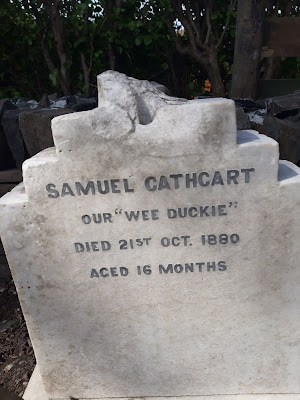 According to the copy of the  plan of burial plots in our garden, he is beneath our Pittosporum along the edge of the driveway. 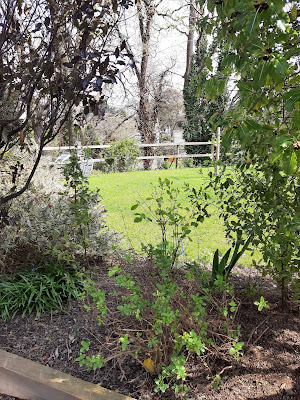 In the book, Story From Stone, written by two local ladies, his story has been researched and he has a chapter of his own giving a brief summary.

His parents were William and Mary Elizabeth (Minnie) Cathcart.  Reverend William Cathcart was born in Northumberland in 1850 and Minnie, the daughter of a pawnbroker, grew up in Newcastle upon Tyne.  The couple had moved to Ramsey where William was ordained in the Presbyterian Church in 1878.  Minnie gave birth to two children,  Percival in February 1878 followed by Samuel in June the following year.  She appears to have moved to London for each birth, it is presumed as her brother in law was a doctor there.  In 1880 the couple were living in a house just around the corner from where we are now when little Samuel contracted a respiratory infection and  died of acute capillary bronchitis, aged only 16 months.  Sadly, only four years later Minnie herself died from asthma and bronchitis.

There are many such sad stories about the people buried here but this one touched my heart more than most.

at April 17, 2022
Email ThisBlogThis!Share to TwitterShare to FacebookShare to Pinterest