When we first came to view this house the first thing P said was " That fence is rotten. We'd have to replace that."

I wasn't particularly worried about the fence. It is just the boundary between us and our neighbours, but he has been determined to fix it.

He has spent several weeks taking out the old rotten posts, sorting out which of the rails can be reused and then trying to get quotes for a new fence. Only one of the three fence companies came back with a quote, which was eye watering, so he decided to do it himself, using inexpensive agricultural Cundy posts and the fence rails salvaged from the old one. He had to dig out holes for the new posts as the spacing was now shorter.  Very hard work.

Now most of the posts are in and some of the rails attached. He has run out of cement mix and screws but this is his progress so far... 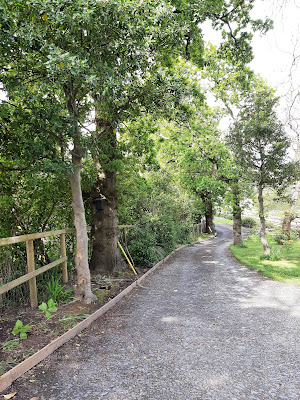 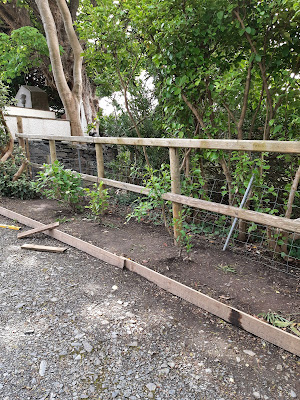 It has taken several weeks so far but not bad for a 72 year old.

Looks like we have been fortunate to have been spared the expense of having a fencer in. It seems we are now unlikely to get back the deposit from our rental property. There are some very shady landlords about.

at May 19, 2022
Email ThisBlogThis!Share to TwitterShare to FacebookShare to Pinterest