I Am Not A Nerd

But it would have helped this weekend.

For the past few weeks we had been having problems with our WiFi connection dropping every few minutes.  There was also  severe interference on our landline - we could hardly hear conversations due to the loud crackling noise.

We reported it to Manx Telecom and an engineer fixed the fault on the line (somewhere out in the street) and we received a replacement router as ours was pretty old and not working too well.

I plugged in the router, entered the passwords and all seemed OK.  Except that P's laptop in the box room upstairs couldn't seem to hold an internet connection for long and kept dropping out.  Pretty frustrating for him on rainy days when he can't get out in the garden.

Yesterday evening I remembered that we had bought a WiFi range extender when we moved in here as the signal struggled to reach the upstairs rooms.  After six months I couldn't remember how I had originally installed it and set it up so this morning was spent rummaging through drawers and cupboards to find the box and instructions. 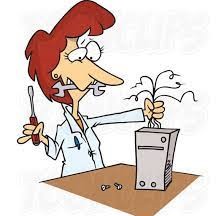 Eventually I found them and, with the help of Professor Google, I finally managed to copy the new router's settings onto the extender and now P is happily internetting upstairs while the wind and rain lashes down outside.

He did vacuum the whole house for me as a reward!

at June 26, 2022
Email ThisBlogThis!Share to TwitterShare to FacebookShare to Pinterest